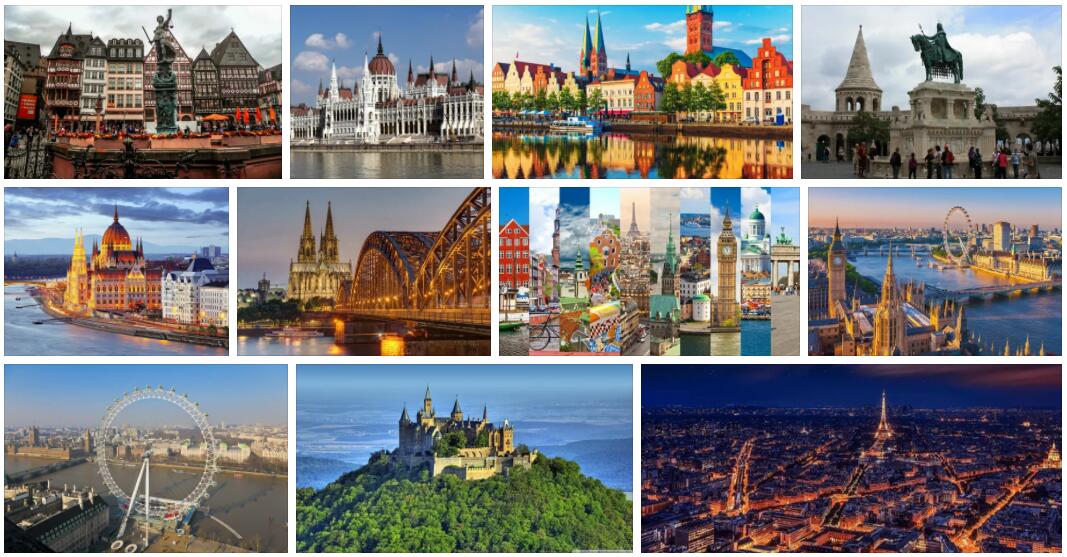 The landforms in Europe are shaped by younger crustal movements, especially tertiary, of the ice age history and of the bedrock.

Elderly massifs, formed under older folds (Hercynic and Caledonian), are raised as blocks: throughout Spain, the Central Massif in France, further Normandy – Brittany, Rhinean shale mountains at the lower Rhine, Les Vosges and the Black Forest, with the intermediate Rhine valley being formed by subsidence, and Böhmerwald – Sudetene. In the British Isles: Cornwall, Wales, Cumberland, the highlands around the center of Ireland, and the Scottish Highlands, as well as the western part of the Scandinavian peninsula. The landforms in these areas are characterized by the intricate, strongly changing bedrock structure. Where small glaciers (bottom glaciers) have worked and are found, the typical alpine forms are found in the mountains, as in the Alps, Jotunheimen and Lofoten.

Of the lowlands, Posletta and the Hungarian lowlands represent low-lying areas between the mountains, filled with loose material. On the Spanish block there are almost flat layers, which give even shapes even though there is not much lowland. The lowlands within Les Landes in France, around Garonne, the Paris Basin and the London Basin consist of almost flat layers, just slightly curved at the edges towards the raised masses. The Netherlands is almost entirely formed by river fillings in the sea. The northern European lowlands of Denmark, northern Germany, Poland, Belarus and western Russia consist of loose material, formed during the ice ages, the Moors- and river material. Here is low-lying land, but with many relatively marked valleys, made of meltwater rivers during the ice age. The bedrock areas in Sweden and Finland are low, but often with marked, hilly terrain and with a number of lakes. Lakes are most often found in previously iced areas; the largest are Ladoga and Onega in Russia.

The European Mediterranean coast and the Portuguese-Spanish Atlantic coast are for the most part a rocky coast, where high land reaches the sea. Where the lowlands go down to the sea, the high coast is interrupted by flat coasts, which are deep in the Adriatic, where Po sets up its huge delta. Along the coast of Italy, protruding parts of higher lands alternate with strong abrasion of the sea, with parts where the loose material is deposited by the ocean currents and by rivers from land. West of the Rhône estuary stretches a low coast with shallow lakes within. The French coast towards the Bay of Biscay is low, characterized by loose material, and with coastal dunes along the entire beach. The Brittany-Normandy coast is in solid rock, this also applies to large parts of Ireland, Cornwall and Wales. The coast between Normandy and Belgium consists of stratified rocks. Here it is often a steep, relatively straight coast, and long stretches of coast consist of chalk layers.

The coast of the Netherlands, the northwestern part of Germany and Denmark and the southern Baltic coast are mostly low. Frisian islands are old coastal dune rows that the sea has broken through in relatively recent times. In Denmark there are smaller lots with steep coasts, cliffs in moraine material, or in limestone like Møns klint. The Finnish and Swedish Baltic Sea coast, the Swedish west coast and the Norwegian south coast are formed by a relatively low, hilly bedrock that dips into the sea. The small elevation portions then act as islands and reefs. See population of all countries in Europe on Countryaah.

Large parts of the Scottish coast and the entire Norwegian west coast are relatively high and characterized by the fjords that cut into the country. These fjords are made up of glacial streams that have flowed through the valleys from inland during the Ice Age. Actual coastal islands are found only on certain stretches, such as on the northeastern Adriatic coast, where the direction of the rock in the mountain runs along the coast. In the northwestern France, Scotland, Norway, Sweden and Finland, the islands often consist of hard, old rock.

Europe’s position between the Arctic Circle and the Circle, means that the most prevalent climates are of a temperate type. In the coastal zone along the Barents Sea there is polar climate, and in the Mediterranean region the climate is subtropical. As Europe is a peninsula in the Atlantic, its western part has a strong maritime feel, while the easternmost becomes continental. Europe’s topography does not present any major obstacle for air masses from the sea to enter quite far across the continent. However, the Scandinavian mountain chain provides a certain orographic reinforcement of the rainfall on the west side and rain shadow effect in the east. The east-west mountain range in southern Europe, on the other hand, constitutes a barrier for air masses moving north or south.

Europe’s position in relation to the large-scale pattern of air pressure centers and fronts is also of great importance for the climate. The low pressure in Iceland and the Azorean high pressure maintain a western air flow, which is strongest during the winter and especially affects the northwestern part of Europe. The introduction of air heated over the North Atlantic current (Gulf Stream) entails, among other things, that the January temperature on the coast stays around 0 °C up to 70 ° north latitude, and that the winter temperature is up to 20 °C higher than the normal latitude. The Russian high pressure and low pressure over the Mediterranean also affect neighboring parts of Europe. The North Atlantic polar front has a major impact on the climate through the cyclones that move in large numbers towards Scandinavia or with a more south-easterly direction into western Europe. They lead to a strong change in the weather, but also to bring warm air from the Atlantic over land. Cyclones from the Atlantic Arctic front can also come in with cooler weather as a result. Even over the Mediterranean, several cyclones move to the east during the winter and cause much rainfall, while the warm, sunny summer here is determined by the Azorean high pressure.

Europe can be divided into four different climates under the above conditions:

Maritime climate occurs in a narrow area in the west: western Norway, Iceland, the British Isles, Jutland, the Netherlands, Belgium, western France and northern Spain. The climate is characterized by mild winter, cool summer and abundant rainfall, especially on the western side of islands and heights. The rainfall falls predominantly in the fall and winter. The summer temperature varies according to latitude and altitude. Reykjavík’s January and July temperatures are 0 °C and 11 °C, respectively, while La Coruna in northwestern Spain has 10 °C and 19 °C, respectively.

Temperate transition climate occurs in an area central through Europe. It is affected by both maritime air masses from the west and continental from the east and includes Sweden, eastern Norway, eastern France and central and southeastern Europe. The climate is characterized mainly by relatively cold winter and hot summer as well as rainfall throughout the year, but most of the summer. Snow falls in northern and higher areas, where it can remain. The rainfall varies between 500 and 2000 mm per year.

Continental climate occurs in eastern Europe, which covers the largest area. The climate is characterized by a winter that is long and cold, with a widespread snow cover. The coldest is in the northeast, where the January temperature is around −15 °C. The summer is warm, especially in the south-east, where the average temperature is around 25 °C. The temperature difference during the year, ie. the difference between the average temperature of the coldest and the warmest month is significant, between 15 °C and 30 °C. The rainfall mainly falls in the summer. In Moscow it is 575 mm per year, while the plains in the north and south-east only get half and therefore are significantly drier.

Mediterranean climate occurs in a mostly narrow coastal area in southern Europe. It has subtropical character and is characterized by mild and humid winters as well as hot and dry summers with clear skies. In July, the temperature is around 25 °C, in January 10 °C. The rainfall falls during the winter and the amount is affected by the topography. The western sides of the peninsula and islands receive more than 1,000 mm per year, Rome has 760 mm and Athens 400 mm per year. 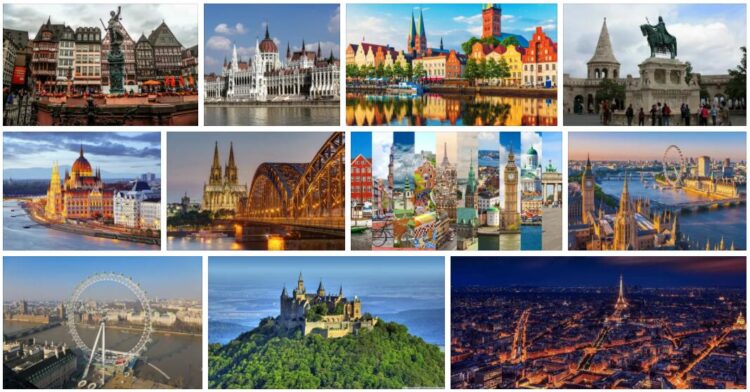