National movements have contributed to a number of new sovereign states. The Arabian Peninsula (except Yemen) was united into one kingdom, Saudi Arabia, all in 1927. The other Arab territories that were mandated from 1918 gained independence in the 1930s, namely Iraq in 1932, Lebanon and Syria in 1941 and Jordan in 1946. A new Jewish nation state, Israel, was created in 1948. The Philippines, which became American possession in 1898, gained its independence in 1946. Burma became an independent state in 1947. India became independent in 1947, and divided into two states, India (Republic of 1950) and Pakistan (Republic of 1953; East Pakistan made itself independent as the Republic of Bangladesh in 1971).

Indonesia became a sovereign republic in 1949, and the same year the Kingdom of Laos became independent. Cambodia gained its sovereignty through a separate agreement with France in 1953, Vietnam the same year after an eight-year war and with a fateful split into two zones along the 17th latitude, reunited in 1975 after the end of an American intervention war (see Vietnam War). Malaya became a sovereign state in 1957. A new and larger federation, which also included Singapore and the two British colonies of North Borneo (Sarawak and Sabah), was established in 1963 under the name Malaysia. In 1965, however, Singapore resigned from this federal state.

As long as national movements nourished anticolonial currents, the idea of cooperation was strong. It reached a climax with an Afro-Asian congress in Bandung in 1955. Later, the special interests of the individual nation states have repeatedly hampered regional cooperation efforts. New nationalism has also given rise to serious armed conflicts, such as between India and China in 1962 and between India and Pakistan in 1965.

The tension between the United States and the Soviet Union in the latter half of the 20th century (the Cold War) was also reflected in the security policy situation in many places in Asia. Through the revolution in China in 1949 and the outbreak of the Korean War in 1950, the superpowers gained new frontlines in Asia. Vietnam was hit by a bloody civil war between the South and the North from the mid-1950s to 1975 (the Vietnam War). The United States was actively involved in the war on South Vietnam, but suffered defeat. After the country was reunited as the Socialist Republic of Vietnam in 1976, it was the dominant power in Indochina, with Pro-Vietnamese regimes in Cambodia and Laos. Vietnam’s armed intervention in Cambodia in 1978–1989 intensified its opposition to China.

However, China-India relations are characterized by centuries of suspicion and rivalry, as is the case between China and Vietnam and between China and Korea. The relationship between China and Japan is complex on both sides, based on common cultural features, a bloody Japanese occupation (1932–1937) and two Sino-Japanese wars (1894–1895) and (1937–1945). 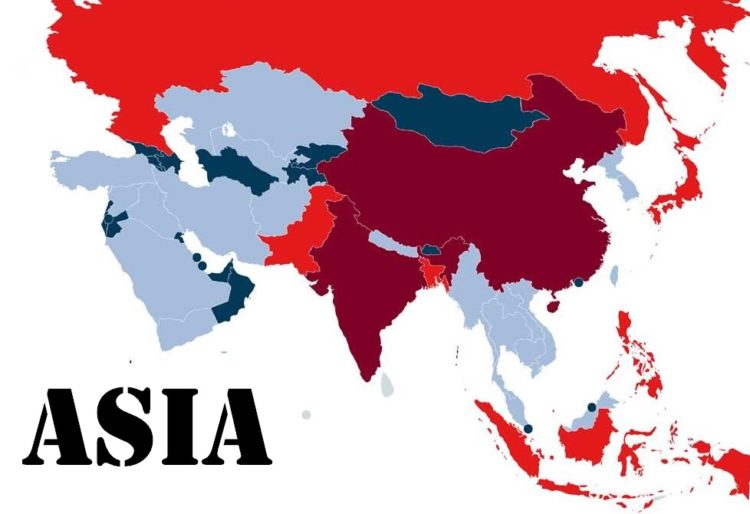 The region has also seen visionary, peaceful collaborative projects grow. The alliance-free movement got its start in Indonesia in 1955 (the Bandung Conference). In 1967, regional cooperation took on a specific form in a Southeast Asian organization, ASEAN (Association of Southeast Asian Nations). In 1985, seven countries formed the South Asian Association for Regional Cooperation (SAARC), a loosely organized forum to promote economic and other cooperation. In 2003, they signed a free trade agreement that includes India, Pakistan, Bangladesh, Sri Lanka, Nepal, Bhutan and the Maldives. Check Countryaah.com for more countries.

Asian countries have also joined cooperative organizations both east and south, including Australia and countries in North and South America (APEC) and west with the EU (ASEM). APEC (Asia-Pacific Economic Cooperation) was formed in 1989 as a forum for countries in the Pacific region; in 1998, membership increased to 21 countries, including heavyweights such as the United States, Japan, China and Russia. In 1994, ASEAN began the implementation of the AFTA (ASEAN Free Trade Area) free trade area, while APEC made a decision in principle on full free trade in “Pacific Asia” by 2020. However, the countries’ very different development steps are slowing down the dismantling of the customs walls.

Very different strategies for economic development have been followed and followed in Asia. In common, the development is aimed almost at industrialization everywhere. For the economically managed countries, the general development model has long been based on Lenin’s idea that agriculture must provide food for the population and provide the savings with which the industry is to be built. For China, the idea took on a slightly smoother design, expressed by Mao’s principle of “walking on two legs”: thus initiating a tailored, simultaneous development of both agriculture and industry. In recent years, after the collapse of the USSR, both there and in China, an opening has been introduced to the market economy, but still with strong government control. The Chinese economy is experiencing strong growth. In other states, market economy principles for development have long been followed; for example, India has pursued an import substitution industrial policy. This encouraged domestic production of goods that had to be imported. In order to help the construction process, the infant industry was protected from foreign competition. Under the policy pursued, it has proved difficult for the locally produced goods to achieve a quality on par with foreign products at the same price.

Japan, South Korea, Taiwan, Hong Kong, Singapore, Malaysia, Thailand, the Philippines, and some other countries have pursued various types of market economy policy that have gone into trying to make money on the world market for their own development. This has succeeded in many places and has been seen as a model that can be used everywhere. However, there are many indications that the great success has been achieved on different, specific conditions. Thus, for example, Japan had a basis in a well-educated, but low-paid and disciplined population, an efficient corporate structure and national capital. This pattern has partly been found in the other high-growth countries, and in the early 1990s, East and South Asia is becoming more and more like the world’s future economic powerhouse.